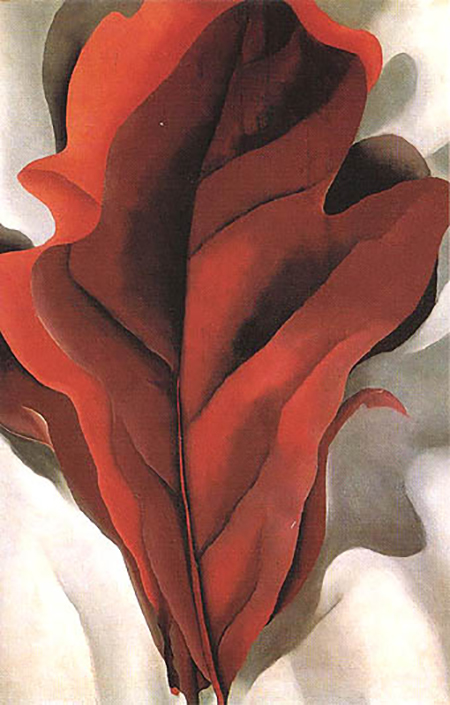 "American Mosaic" is a comprehensive re-telling of the history of American modern art through the perspective of the Phillips Collection, Washington D.C., this country’s oldest modern art museum. This traveling exhibition features several dozen paintings acquired by the museum’s founder, Duncan Phillips throughout the early- to mid-20th century. The show, of 65 pieces divided into ten sections with extensive didactics, offers a fresh look at the art of this period through the eyes of a collector whose tastes often embraced soft colors and shapes. “Along the Erie Canal” (1890) by Arthur B Davies, is a romanticization of large, puffy trees dominating the canal below and cloudy sky above. Among the impressionist paintings, John Henry Twachtman’s “The Emerald Pool” (c. 1898) presents a dreamy look at a body of water, surrounded by pale landscaping with the mountains beyond. While the “Forces in Nature” section displays more turbulent settings, these also, as with Harold Weston’s “Wind, Upper Ausable Lake” (1922), feature harmonious shapes and soft colors. Other distinctive paintings include: Georgia O’Keefe’s “Large Dark Red Leaves on White” (1925), with a burnished orange and brown leaf dominating the canvas; John Sloan’s “Clown Making Up” (1910), a profile of an old clown in white, overwhelmed by the dark brown dressing room he inhabits; Allan Rohan Crite’s “Parade on Hammond Street” (1935), of African Americans parading and watching; and Richard Diebenkorn’s “Interior with View of the Ocean” (1957), an abstract piece, yet still containing figurative elements, as it pre-dates his later “Ocean Park” paintings. The variety of work in this exhibition, along with individual works' carefully rendered compositions and chosen subject matter, will reward time and concentration.

I have no experience with children’s TV of the 1980s, the source of Brian Bress’ hybrid aesthetic mash-ups. Re-entering the antic brain of Brian Bress is like being flung into Goonies and reentering through a textbook on Postmodern practices of appropriation. This fun and intriguing show opens with a pair of bucket headed characters who must make a face for (at) each other. The problem is that the actors in "Organizing the Physical Evidence (Purple)" are without eyes and must fumble through an odd collection of possible facial features. Making art while blind is a recurring theme in the artist’s work, suggesting a need to rethink how art is made.

Rather than make of video a separate art form, in "370, Cover" Bress mobilizes it as a new way of painting on and within a flat surface that is suddenly animated. Bress’ paintings are “monitor” based, that is, a video monitor is hidden within a frame where a “painting” comes alive with visions of its own making. Revealed from behind the activity of the initial surface being sculpted and carved out is a character, Bress himself in a costume, sawing away and creating another layer. Bress’ cartoon drawings jump off the paper as actualized costumes that he wears and becomes something else, a mini-star in his mini-movies. The characters are both endearing and original — who cannot be charmed by a dancing man covered with dangling and bouncing wooden beads? One has no choice but to go along for the ride and enjoy the experience of being introduced to a highly original brain.