Andy Warhol
at Modern Art Museum of Fort Worth, Fort Worth, Texas
Recommendation by Charissa Terranova 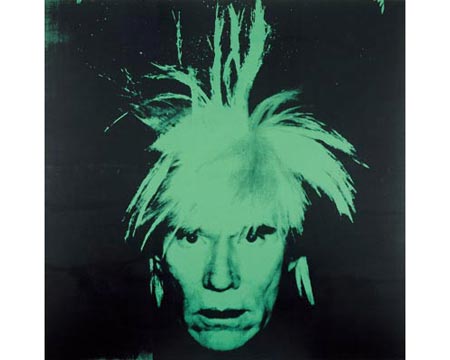 'Self-Portrait,' 1986, Synthetic polymer paint and silkscreen ink on canvas, 108'' x 108'' Collection of the Modern Art Museum of Fort Worth, Museum purchase, The Friends of Art Endowment Fund, Acquired in 1998.

If the giant paintings of Rorschach figures and self-portraits with skulls in  “Andy Warhol: The Last Decade”  are any indication of the artist's internal self, Warhol was probing death during the last ten years of his life. After being shot in his lobby by radical feminist writer Valerie Solanas in 1968, Warhol became more private. Privacy is a much-contested term for one man so devoted to celebrity and stardom, and more precisely, who predicted with incisive prescience the world of reality TV, social networking sites, and the 24-hour news cycle so many years ago. Warhol explained the shift in his life with deadpan ambiguity:   “Right when I was being shot and ever since, I knew that I was watching television.  The channels switch, but it’s all television.” TV was Warhol’s preoccupation at the end of his life, and it is the culminating element of the exhibition.  An hour-long loop plays clips of Warhol’s forays into TV land, including segments from  “Fashion” (1979-80), episodes 8 and 9 of  “Andy Warhol’s TV” (1981; 1983) and  “Andy Warhol’s 15 Minutes” (1986-87), a project on which he was working when he died of a heart attack while recovering from routine gall bladder surgery. The exhibition offers a long overdue survey of work from this period of Warhol’s life, and includes many works rarely seen publicly. In addition to the general sense of memento mori flourishing throughout, the paintings in the exhibition register the fantastic resurgence of painting at work in New York throughout the 1980s. The tension between neo-expressionism and the Pictures Generation is felt on the surface of a series of diptych self-portraits from 1978 showing Warhol’s head layered in multiples as though double exposed, one with him facing outward in pastel and black and white, the other showing him in a red and black x-ray-like silhouette.  His face has been delineated by silk-screen while paint has been scrubbed across the surface with the luscious gesture of a freewheeling hand. They capture the marvelous friction between the hot action of expression and the cool autonomous concept of the automatic, as do the collaborative paintings by Warhol with Jean-Michel Basquiat and Francesco Clemente.  Warhol shines forth, a penetrating soothsayer of the even more-mediatized world to come.  One wonders what Warhol would have done with Facebook.