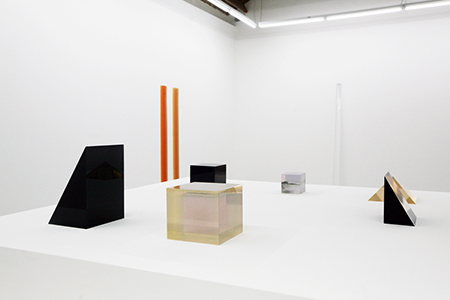 Peter Alexander’s vivid sculptures are lyrical and oblique, their planes and edges as compelling as their colors, as they reflect and transmit light. Presented not in chronological order but rather in stunning visual groupings, the works range from his older, more translucent polyester resin to his newer, more opaque urethane pieces.

Alexander became physically ill working with resin years ago, and it was not until an exhibition at Paris’ Pompidou Center damaged an older work that he returned from painting back to sculpture to replace it. In so doing he utilized the new urethane medium. According to gallery director Chris Heijnen, “It’s not just a reboot, it’s an investigation of color. Urethane highlights and enriches color, while resin yellows.”

Whether cubic or wedge-like, pyramid or square, the shapes create a rainbow of colors that radiate vibrations of light. The qualities of light and color together shimmer, dazzle and seduce viewers to observe each piece from all angles to absorb both their simplicity and complexity.