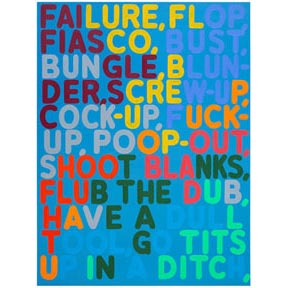 Given one’s likely association with Mel Bochner’s work – painterly, perspectival boxes from the ‘80s and early ‘90s – his current show of text paintings comes as a surprise and even a delight. In fact, Bochner has worked with text his whole career, going back to the mid-’60s, in the climate of early conceptual art. This body or work, which he’s been developing for about five years, is made up of single-themed oil paintings of text running vertically, with commas separating an often retro- sequence of words and phrases. Along with a selection of more colorful (as it were) words, “Failure” includes such obscure phrases as “Flub the Dub,” “Have a Dull Tool” and “Go Tits Up in a Ditch;” while  “Nonsense” proffers such classics as “Jibber Jabber,” “Twiddle Twaddle,” and “Bushwa.” The font Bochner’s chosen hovers just between too-loose-to-be-stenciled and too-neat-to-be-hand-painted, though one imagines they’re a mix of the two, with a style reminiscent of the artist Bob & Roberta Smith (yes: just one artist). Most of the words are made up of two to three colors, some of them blending into the flat monochrome background, making for an appropriate visual playfulness to accompany the kvetching texts, which jab our sides as much as rip us a new one.