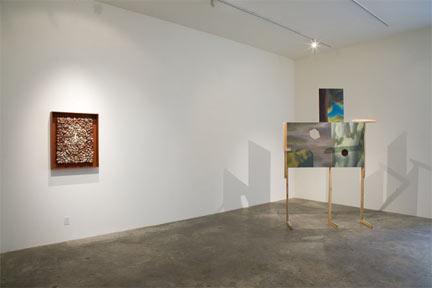 Mexico City’s Ilán Lieberman is a big dreamer, thanks to meditation and some ESP research, and “Dream Works” is the formulated result of this process. Jonathon Borofsky made drawings and paintings about his dreams; Lieberman re-creates their protagonist-like subjects, including paintings that have legs (made up of wooden stretcher-bar sections); a portrait of William Burroughs in red-and-white marble stones; and an oversized wool, pants-like garment bearing down heavily on a hanging rope clothesline. The level of invention and execution here is high, though the dreams are more cryptic than revealing; there’s a lot here to digest if you’re up for it. Tim Sullivan’s four-feet in diameter hanging records are phonographic/ photographic discs that both play modified California pop anthems (apparently they can be played; grooves are visible on the polycarbonate plastic surface) and irreverently picture a few cultural clichés, from the blond starlet to the palm tree-silhouetted sunset, along with darker and campier themes (including the artist himself with his head and arms casually poking through orifices in Charles Manson’s head). Sullivan conjures the Midwesterner’s take on the Golden State vis-à-vis “Tales from the Darkside.”