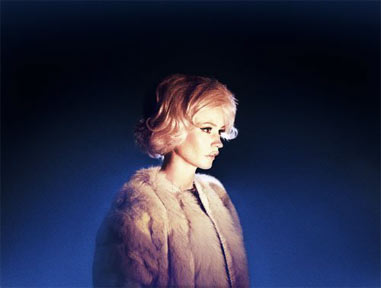 The first chromogenic print encountered by viewers of Alex Prager’s “Week-end” is a saturated close-up of a brunette called “Wendy” whose parted lips indicate her effort to communicate with someone beyond the frame, while her emerald eyes express a longing gaze toward something that we cannot see. Strategically placed across from “Wendy” is “Barbara,” posing against a backdrop of gradated blue light, while a spotlight exposes her fur jacket and expression of destitution as she too looks off into the distance. “Week-end” is a collection of photographs depicting female subjects who invert their gaze, suggesting that they belong to a world which is “other.” A braless subject named “Tiffany” stands in front of a rack of books wearing a puke yellow turtleneck. In our attempt to capture her gaze we realize that Prager has concealed her eyes behind carefully adjusted glasses. Prager unhinges John Berger’s notion of the gaze because the viewer is accustomed to surveying the subject that does not acknowledge our gaze. Prager’s subjects overtly assume B-movie role character types, but how does the relationship change between the subject and viewer when the subject’s gaze is directed past us? “Tiffany’s” gesture of adjusting her glasses is a subtle insertion by Prager that her subjects and not the viewer control the power of the gaze.