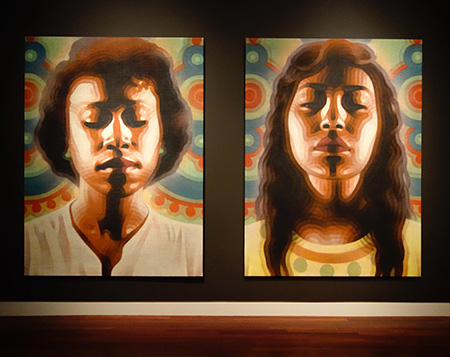 In Los Angeles and Phoenix, El Mac’s highly recognizable murals — with their tightly controlled ripples of spray paint — have added to the élan of the street art movement in both cities. The artist excels at the ultra-closeup, photorealistic depiction of ordinary people, all the while incorporating his signature contoured lines and deep shadows. The long white walls easily accommodate glowing, monumental works such as the 23-foot-wide “La Madre (The Mother),” which features glyphs by fellow street artist and periodic collaborator Retna as its background.

Another aspect of El Mac’s work emerges: his ability to reproduce his style on many surfaces. In this handful of paintings are scenes on linen, canvas, steel and wood. But it is his use of stretched burlap that most amazes. In “Omayra and Sumer (after Loïs Mailou Jones)” the texture of the surface combined with terraced lines of paint lends his distinctive pulsating quality to these paired faces of young women, sparking a narrative that is both touching and enigmatic.