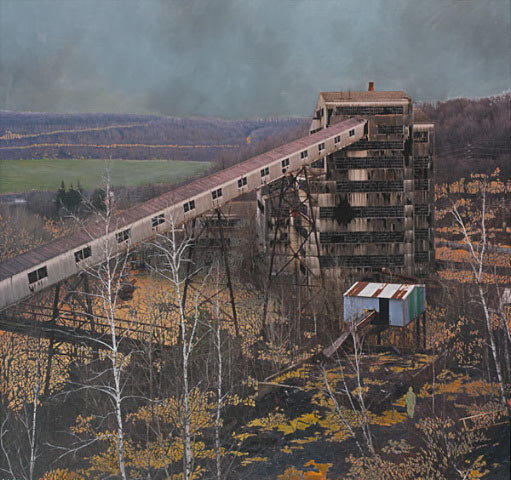 The landscape in western art has always been about more than picturesque scenery: it symbolized God’s handiwork in premodernist art; with the modernists it became a vehicle for expressing how human perception and painterly transcription cooperate, or as a pretext/stimulus for expressionist gesture of vibrant color. In some of the best contemporary art, it has become a symbol of human culture’s mixed legacy: the natural landscape is “spoiled” by development, but that development yields its own strange, hybrid, transient beauty, proliferating and/or collapsing before our eyes.

Such, at least, is the interpretation suggested by Bradley Castellanos’s astonishing mixed-media photo-paintings of “an environment at odds with itself.” In an interview with the San Francisco Chronicle’s Nirma Nataraj, he said, “People retreat to nature for solace and rejuvenation, but at the same time they have completely corrupted it and exploited it for its materials. . .”

Castellanos’s large-format color prints — which, once mounted to Masonite, he cuts with an X-Acto knife into lacelike dappled-light/shade patterns and then partially repaints in oil or inundates with resin pools — thus become metaphors for resource extraction and commercial development. Castellanos: “I’ve been capturing landscapes that are desolate — meaning without people — but there’s a presence of people through the debris. . .the paint acts as a toxic agent, infiltrating the landscape. . .[and infusing it with] a mysterious energy.” That energy comes through even in this relatively small show of eight pieces.

While a few of the works (the monochrome glossy-black 'Smokestack,' the self-conscious 'Self-Portrait Mapping') seem to belong to another body of work, the industrial (or post-industrial) sites depicted in 'Mahanoy City,' 'Water Gap,' 'Swamp Bonham,' and 'South Gate' compellingly, beautifully combine the old romantic sublime of 19th-century painting with the matter-of-fact scrutiny of the 20th-century photographic tradition. We both marvel at their intricate detail and coloristic verve, and then, stepping back, get the big picture.