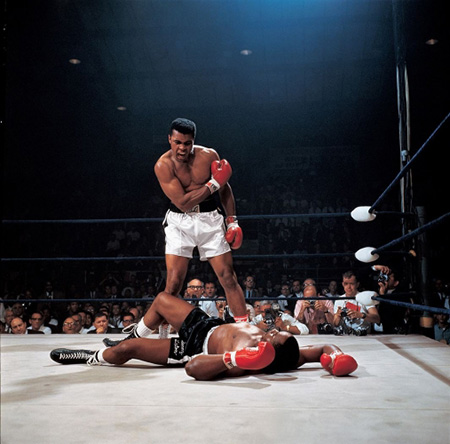 Neil Leifer’s “Relentless” at first appears a bit nondescript due to the exhibition having received the smaller gallery space, in contrast to the Sebastiao Salgado retrospective which fills the gallery’s main walls. But it nevertheless is well worth your while. Sports fans and anyone interested in American history, politics and culture will appreciate it. It presents about twenty of Leifer’s most iconic prints. Among them is a remarkable black-and-white photograph of President John F. Kennedy and Vice President Lyndon Johnson as they’re watching a Washington Senators baseball game at Griffith Stadium in 1961. There is an image of the 1968 Summer Olympics in Mexico City, in which the black American athletes Tommie Smith and John Carlos took a stand for civil rights by raising their black-gold fists during the medal award ceremony.

Another highlight of the exhibition are the images of Muhammad Ali, who passed away last month. These were shot during the years before and after Ali’s faith-based refusal of military induction. He had converted to Islam in 1964 and was affiliated with Nation of Islam. The New York Athletic Commission stripped him of the heavyweight title in 1967 following his conviction. In 1971 Michael Meltsner, the first assistant counsel of the NAACP Legal Defense and Educational Fund, Inc. (LDF), succeeded in overturning this on appeal, thus restoring Ali's boxing career. Although, the exhibition doesn’t cover the epic battle between Ali and Joe Frazier in Madison Square Garden on March 8th 1971, it features an image of him fighting Argentinian boxer Oscar Bonaventura during his second bout, after his three-year suspension, in December 1970 at Madison Square Garden