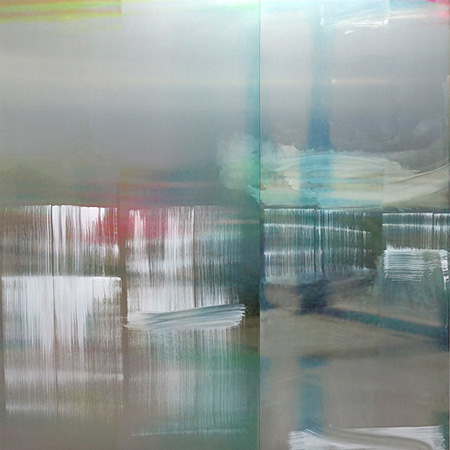 We live in a hybrid age with the old hierarchies and lines of demarcation dissolving, usually for the better. In art, the pleasures of recombination usually outweigh the outrage of purists. In the case of Justine Frischmann’s mixed-media paintings, oil paint brushed and sprayed atop subtly printed digital photographs infused on aluminum, we have a mash-up of painting and photography, as well as abstraction and realism. This would have raised aesthetic hackles a generation ago, but now seem an inevitable and fruitful blurring of what now strike us as arbitrary boundaries.

The British-born punk rocker of Elastica, now living in San Francisco’s North Bay, and student of architecture and Buddhism, proves that crossover talent is no oxymoron with her “Lambent" series of paintings. These softly shining, glowing or flickering abstractions alternate between the virtual space of their photographic source material and the charged space produced by her painterly interventions in spray enamel and brushy gestural white oil paint.

Ten paintings — “Lambent #74” to “Lambent #93,” all from the past two years, most of them medium-sized, in square format (with two larger diptychs) — comprise the show. The silvery aluminum substrate may conjure for photo aficionados the mirrored surface of daguerreotypes with their mutable, transient images: change position, and the values flip, positive to negative, and back again. The paintings likewise alternate from light to dark, as the viewer’s position and gaze change. The metal surface incorporates colors from outside the work, but diffusely, so that the viewer seems to inhabit the virtual space of the photographed architectural settings and the painterly mists and waves that Frischmann has added in counterpoint. These works prove that painting can draw on tradition — the crystalline structures and colored atmospheres of Lyonel Feininger and Larry Bell, the physical calligraphy-writ-large of Willem deKooning and Gerhard Richter come to mind — while moving it forward into the digital age; “looking for faith,” says Frischmann, “when there’s so much doubt.”