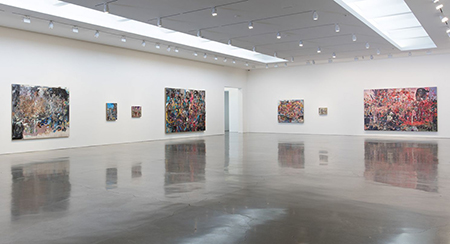 Elliott Hundley, "There is No More Firmament" installation view, 2016

Elliott Hundley's latest accumulation of organized chaos is also his best to date. "There Is No More Firmament" feels like an appropriate title for this election season, but Hundley doesn't engage (or work) in such short-term timeframes. Indeed the name and the show's inspiration are derived from an Artaud play. As has been the case in previous efforts, the (one) sculpture and a couple of paint-only works feel extraneous at best and highly inferior at worst, but they're unassuming enough to not get in the way of his bread-and-butter — collage-based works incorporating magazine and photo cut-outs, mixed-media sculptural elements, including things like mirrored tea candle holders and abalone, painting, and his signature bobby-pinned cropped photo specimens floating several inches off the surface. Referencing Artaud, compared with the Greek tragedies that have been his source in the past, means modern pop-cultural imagery has infiltrated the premises, adding a certain familiarity, and, well … pop flavor. But as always and to Hundley’s credit, the imagery is too dense and visually and referentially complex for one to get too firm a handle on it. You may never get the same read twice, and, given your willingness to accept that, will be easily (and happily) swept up into Hundley's maelstroms.