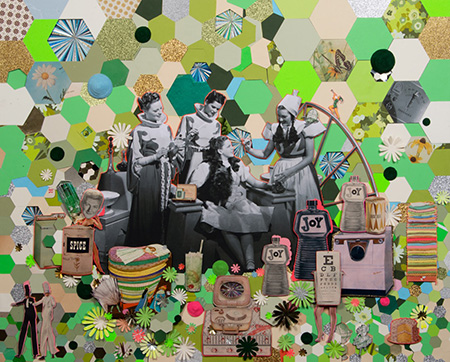 As the hairspray, wig hats, shirtwaist dresses and dyed-to-match heels of the 1950s gave way to Lucy in the Sky with Diamonds, flower power and free love in the 1960s, a certain innocence was lost forever. At least that’s the way it sometimes appears. As it turns out, the 1950s were not so great — there were unhappy marriages between abusive husbands and repressed wives, a lack of civil rights, alcoholism and the abuse of pills detailed in the bestseller “Valley of the Dolls.”

Kelly O’Connor draws imagery from both decades, and like them, her work is bright and happy on the surface. Deep down, however, things are not as they seem. There is something disturbing in the elaborate collages that depict families vacationing in Disneyland. Fathers watch children riding Dumbo the Flying Elephant in “Calcified Curtain.” O’Connor’s signature stalactites and stalagmites close in — their sharp points reach one of the elephants and encroach on the male figures. “Died to Match” depicts Judy Garland as Dorothy in a futuristic “Wizard of Oz” beauty salon, where she asks if they can dye her eyes to match her gown. Surrounding her are the accoutrements of the stay-at-home mom: Joy detergent, Ajax scrubbing powder, a pink washing machine, a portable hair dryer and a cocktail. The background is a patchwork of classic O’Connor hexagrams and daisies. Unlike the characters she played, Garland was a tragic figure, exploited by studio executives who addicted her to prescription drugs.

A series of ten smaller collages titled "No Man’s Land" are portraits of women from period magazines. “No. 10” wears the kaleidoscope glasses that became so prominent in O’Connor’s last show, as well as a daisy-chain necklace and earrings. “No. 8” is Mia Farrow embellished with a massive daisy crown. In the 1960s, Farrow married Frank Sinatra and Andre Previn, older men whom she eventually divorced. With her chaotic personal life, Farrow is perfect for one of O’Connor’s seemingly serene portraits in which superficial beauty masks interior unhappiness. The portraits reflect the show’s title, "Hypnotic Void," in which the women seem like all-too-perfect Stepford wives. The dark undertones of O’Connor’s work make her bright colors and exuberant images even more unsettling.