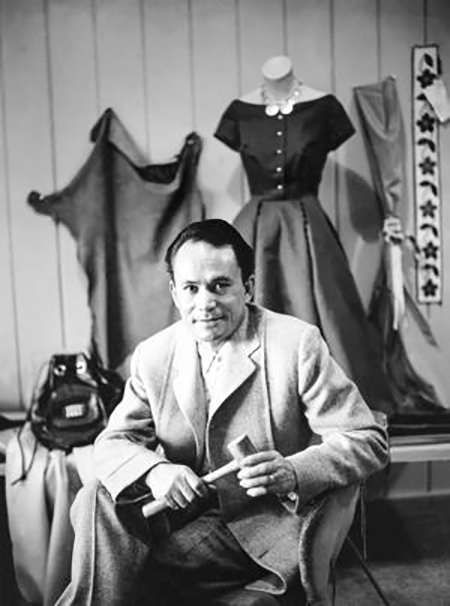 Many of the artworks in "Lloyd Kiva New: Art, Design & Influence" bear no signature. Vast walls are devoted to unsigned textiles by New's students from the Institute of American Indian Arts. A museum employee reveals that some of these textiles were used as curtains at IAIA, and were only restored recently. Today they rightly fly as a tribute to the Cherokee designer and artist's work as a visionary arts educator. Before you get lost between the folds of these lush, modernist designs, take a moment to explore the show's reproduction of the Arizona design studio that brought New to notoriety. Born in Oklahoma in 1916, he studied at the Art Institute of Chicago and taught art at the Phoenix Indian Boarding School. In 1948, he established the Kiva Studio in Scottsdale, and built a fashion empire with innovative designs that imbued traditional Native motifs with midcentury modern flair.

The exhibition's version of New's "Leather and Sales Room" from the Kiva Studio is crowded with mannequins sporting fashions from the 1940's and 50's. New's textiles feature rich jewel tones that overlap in flowing patterns. There are clever designs that remix cave paintings, petroglyphs and the Cherokee alphabet. New left the fashion world in the late 1950's, turning his attention to progressive arts education efforts. Never-before-seen paintings from New's collection represent output from his years as a teacher, but design played a prominent role in this second act as well. He co-founded the Institute of American Indian Arts in 1962, where he set up a textile studio. His students' largely anonymous experiments with the medium crackle with energy, building from his aesthetic in overlapping evolutionary branches. "Let's see that the young Indian realizes the values of his great and wonderful traditions as the springboard for his own personal creative ideas," said New. In this case, New's own legacy was the foundation for young, adventurous artists.