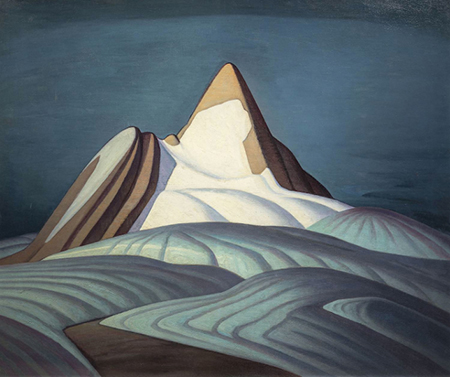 Every so often the Hammer Museum introduces us to an artist of such powerful expression and individual vision that we are surprised we haven’t heard of them before. In the example of Lawren Harris, showcased in “The Idea of North,” we are reminded that we don’t pay enough attention to the culture of our neighbors up north. Harris (1885-1970) was a Canadian, and in his paintings of the northern reaches of Lake Superior, of the Rockies and of the Atlantic coast, he sought to find a Canadian identity through art. With some 30 masterful paintings assembled for this show, this is the first major exhibition of his works in this country, and a splendid one it is. In Canada Harris is considered a key pioneering modernist.

This show features his landscapes from the 1920s and early 1930s, his defining period. He has a kinship to George O’Keeffe in the way he abstracts, stylizes and honors mountains, icebergs and bare stretches of land.  “Isolation Peak” (1929) is one of his most iconic works — a peak with a pyramidal top that is brownish as the snow cap is melting away, with a blanket of a snow still cloaking the rest of the mountain. In the foreground are the contours of furrowed land, some sections brown, some sections already green. In “Ellesmere Island” (1930) ice floes drift before low mountains which look to be warming under the streaming sunlight from above. Though none of the works here are owned by Steve Martin, but actor and art collector has adeptly curated a handsome show. Martin discovered and began collecting Harris work two decades ago