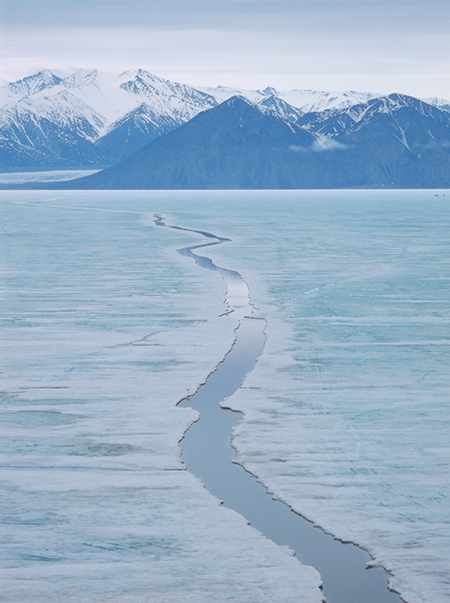 Although it abounds with seemingly timeless landscapes, Larry Cwik’s photographic essay, “The Far North: Portrait of the Arctic” is alarmingly topical. It was only last month that President Obama visited the site of many of these photographs, Kotzebue, Alaska, to warn of the dangers of global warming. That phenomenon permeates every grain and hue of these sumptuous color photographs, taken over a 13-year period not only in Alaska, but also in the Arctic regions of Canada, Greenland, Norway, and Russia.

In his explanatory notes, Cwik points out that the eponymous iceberg in “Iceberg Frozen in Place, Pond Inlet (Mittimatalik), Nunavut, Canada” was indeed frozen when he clicked his shutter in 2014 but may not be any longer, given the alarming rate of thawing in the Arctic. Likewise, it’s impossible not to infer the symbolism in “Zigzag Lead in Ice, Pond Inlet, Nunavut, Canada.” This image, although scenically majestic and formally immaculate, shows a massive crack in an ice-field — a river, in effect, cutting through frozen seawater, flowing inexorably toward the future’s uncertainties. To his credit, Cwik doesn’t bludgeon the viewer with exposition and over-editorializing; he leaves to us the all-too-simple task of connecting the dots. He also lightens the mood with affecting portraits of the habitués of these dramatic climes. This is but one of the globetrotting Cwik’s many ongoing series. Across the breadth of his output, his technical prowess and eye for scenes of poignant humanity marry his documentarian and fine-art sensibilities into a compelling whole.