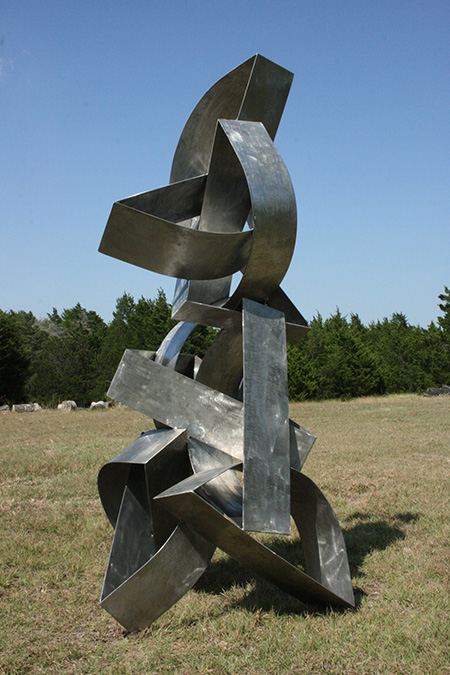 "Heavy Metal" presents two abstract sculptors who work primarily in steel but in very different ways. John Clement bends stainless-steel pipes and then paints them bright colors like red, blue, and orange. The pieces suggest looping drawings in the air. Mac Whitney, on the other hand, bends and weaves together wide strips of polished silver steel into vertical forms that suggest figures — one can perceive the suggestion of legs supporting a body, as well as a distinctive shape that resembles a head. Both artists have several smaller sculptures installed in the gallery, as well as a monumental piece by each in the sculpture garden, which is visible through a back window.

Whitney is a veteran Texas-based artist whose lyrical and dynamic work is part of his series "Linked Sculpture." Flat pieces of metal are welded together to form shifting surfaces that reflect light and create the illusion of movement in space. Their open, angular construction is described by the artist as “linked pieces in a very large chain.” He has stuck with his longstanding vision of monumental sculpture that is abstract and elegant. Whitney has also experimented with various types of metal over the years, as well as surfaces that range from bright colors (he favors red) to polished stainless steel.

Clement’s pieces radiate an upbeat mindset. The New York-based artist became interested in sculpture early on and worked as an assistant to sculptors Mark di Suvero and John Henry. He became an expert welder, which allows him to create complex pieces from metal tubing shaped into circular structures that appear to be moving through space. Both artists prefer to work large, which propels them to seek major public and private commissions. Clement’s clean, organic style works well here with Whitney’s more complex twisting compositions.