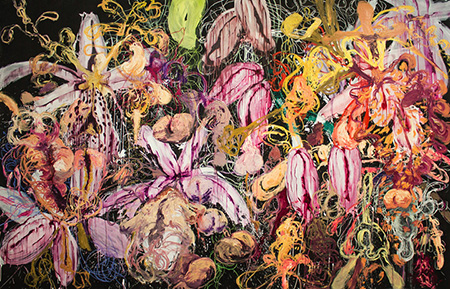 Angel Ricardo Ricardo Rios, "The garden of excesses and some prohibitions," 2014, oil and charcoal on canvas 105 x 167"

Angel Ricardo Ricardo Rios’ arresting exhibition "Garden of Excesses" showcases the Cuban-born artist’s suggestive and resonant large-scale paintings. These massive gestural works depict organic corporeal and floral forms; in Rios’ world, labial petals and phallic stamens bloom from the earth, limning the oft-suppressed relationship between the reproductive functions of plants and those of the human body. By drawing attention to that which the viewer understands as “natural” — here, the environment and its flora — Rios challenges us to reconsider that which we understand as socially naturalized. Is sexuality fixed or fluid? What about gender? Ethnicity?

The massive size of his paintings forces the viewer to consider them in relation to our own body, inviting us to meditate on these themes and the ways in which they play out personally. The piece titled “The garden of excesses and some prohibitions” commands an entire gallery wall to showcase how Rios’ expressionistic drips and splashes play off against luscious and evocative forms. The work recalls that of Cy Twombly — equal parts fiendish and tender, with a deftness for both color and line. Another gallery showcases a selection of the artist’s smaller-scale drawings, which are predominantly black and white and equally expressive.