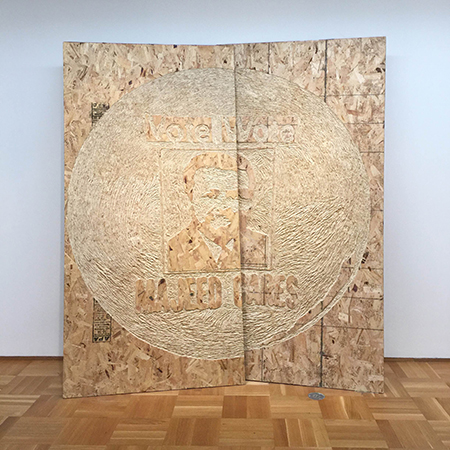 Chicagoan Faheem Majeed presents a specific narrative that is augmented with broader realities, though it’s his level of personal and emotional engagement that captivates. Here, Majeed mines his familial and community histories, using found and symbolic materials to address issues of race, place and politics.

Majeed’s predominant medium is heavily textured particleboard that’s typically used for its utility, rather than its aesthetics. The artist emphasizes the material’s function as the means by which doors and windows are boarded up to hide Chicago’s urban blight from view. However, Majeed employs the particleboard not to obscure, but to reveal. In “Majeed Cares,” the artist carves into two oversized panels the imagery used by his father’s successful political campaign in North Carolina; the work’s title is emblazoned across the surface, prompting us to consider those places and residents for whom apathy, rather than care, is the norm.

In addition to his studio practice, Majeed was the Executive Director and Curator for the South Side Community Art Center, and his experiences there are a key part of this exhibition’s content. A video piece entitled “Piano Push” that was filmed inside the SSCAC stands out. In this work, Majeed slides a baby grand piano across an otherwise empty, wood paneled room. His slow progress throughout the 10-minute film is identified as “futile” in the wall text, though as he calmly and carefully labors over the task, it is resilience (albeit a quiet one) that resonates.