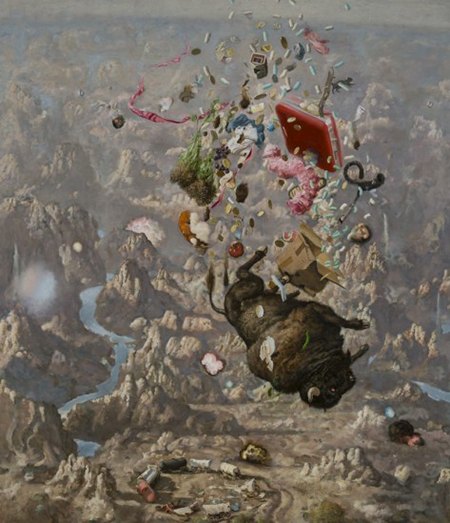 Apocalyptic, trash-laden, desperate landscapes make up “Deep State,” a solo exhibition of new paintings and prints by Scott Greene. These narrative works — one can’t help but immediately begin to create the backstory that renders the worlds we’re looking at — are somewhat loosely painted, which adds to the sense of things falling apart, being oh so tentatively, just barely, held together.

The large, horizontal (144 x 48 inches) “Trading Post” features a cell tower camouflaged like a tall pine tree that’s leaned over (thus the horizontality of the work, which adds to its off-kilter feeling) and filled with supplies such as gas cans and animal pelts. A man toward the top of the “tree” is stashing wood and a lamb is falling to the ground. The rest of the landscape appears chaotic, disheveled.

Providing an element of comic relief to the serious subject of our compromised environment, which is the central focus of the show, is “Cavalier,” which depicted a Napoleon-like figure raising an arm up and forward, a sign that says, “Let us go forth and conquer!” He is astride a sheep, rather than a horse, and our Napoleon has a smiley-face plastic grocery bag stuck to his head, covering part of his face, and a large brown blanket covering his blue and gold uniform, which peaks out beneath. The sheep rears up, a surprised look on its bridled face, on a trash-strewn cliff overlooking the landscape below.

These works exemplify the feel of the show: the “advanced” world (wo)man has created or is attempting to create via technology or bravado and ambition comes with a cost. The natural world, which feeds us and makes our lives healthy and abundant, will ultimately deliver us back to times of primitive hunting and gathering and extreme filth, times we’re worked long and hard to advance from. Green environmentalist nightmare is that the world we take for granted will revert as a result of humanity’s hubris. These works depict an unpleasant yet possible future; they’re beautiful to the eye even, as a political statement, they mean to help sound a serious warning.