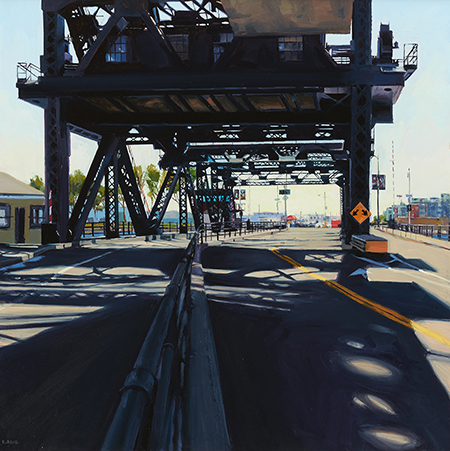 Driving in the technopolis Tomorrowland of San Francisco these days is too much like a video game — full of cars, trucks, buses, bicyclists, skateboarders and oblivious pedestrians — for comfort, whatever the economic benefits may be. The streetscapes of Eileen David, however, preserve in oil paint much of the stunning (and we hope, timeless) beauty of San Francisco without reflecting the ceaseless, ubiquitous refreshing of its architectural infrastructure. Based on photographs and sketches, David’s thirty small to medium-sized paintings depict empty streets in early morning. This is Edward Hopper territory, depicted with a similar feel for light, though without his lonesome vibe or staging of architecture, and a similar direct approach to paint application. Jewels of observation and painterly transposition, “Crosswalk, Late Afternoon” and “Island View” look at San Francisco Bay from Russian Hill.

“Top of Hill,” with its roller-coaster view of the street downhill, “Telephone Poles,” with its juxtaposition of near and far, and several depictions of the Third Street drawbridge will undoubtedly gratify self-regarding San Franciscans with their exquisitely composed views of familiar locations. “Freeway Exit” is a miniature world, only six by thirty-six inches. If the ready availability of parking in David’s eternal SF is appealing, then her small paintings of vintage cars — “Cadillac,” with its fin-tailed late 50s coupe overlooking the Lincoln Park Golf Course for example — will also strike a nostalgic chord for fans of Detroit iron.