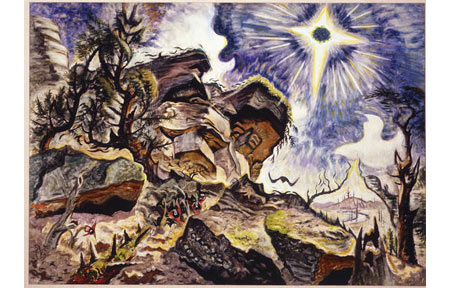 Charles Burchfield, 'Sun and Rocks,' 1918-50, watercolor and gouache on paper.

Anyone who stands in front of a painting by Charles Burchfield bears witness to a public grieving, not of any literal, discernible sadness, but born of the ineffable human malaise of simply existing. Curated with great sensitivity by artist Robert Gober, “Heat Waves in a Swamp” charts a difficult and often gnarled beauty. Works like the stunning “Sun And Rocks,” are reminiscent of William Blake’s hallucinatory drawings, and take us well beyond the “traditional landscape,” presenting an eccentrically supernatural vision where the sky explodes with strange, jagged sunbeams, and giant rocks seem to transmute into birds at the cliff tops. These are not easy images to be taken in on a lazy Sunday afternoon, but hard-won, dark, complicated and, more often than not, joyous expressions of the living world. Some works, like “Freight Cars Under A Bridge,” are more straightforward evocations driven by man-made machinery. These works, while less obviously celebratory, are nonetheless still wrought with Burchfield’s intensity and fascination with everything that lived, breathed or moved.