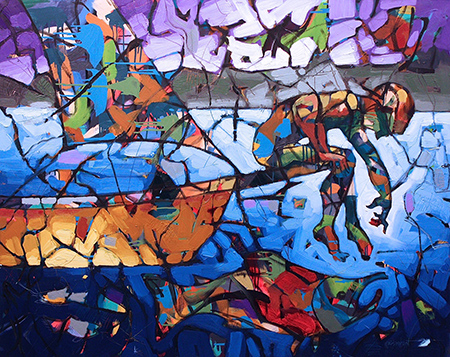 When William Barnhart, a longtime Arizona painter, sculptor and printmaker, recorded his impressions of a summer spent sailing on Lake Union in the Pacific Northwest, it wasn’t in mere snapshots but in large-scale, gorgeously colored oil paintings called “The Seattle Series.” Viewed from several steps away, most of the 19 paintings resemble stained-glass windows. Whether or not that is intentional, Barnhart has managed to turn boat docks, fishing spots, tranquil waters and twilight skies into sacred places. And the human figures, when they appear in the paintings, convey an ethereal quality of their own. In effect, the works are like radiant mosaics, with thick brushstrokes of bold colors layered over black to resemble colored glass and leading. In addition, Barnhart’s gestural technique makes it seem as if a hull, for instance, popped onto the canvas with just a few dozen brushstrokes of orange and brown, or that the use of chunky silver and white brushstrokes can suggest a cloudy day.

Some scenes are lighthearted, as in “Finding Nemo,” depicting a boy who’s balanced on the tip of a sailboat gamely reaching his hand toward a fish almost as large as he is. Other pieces are more introspective, as in “Ballard Locks Balladeer,” in which the dark figure of a man is curled around his guitar, which commands almost as much attention as the man’s muscular feet and lithe fingers. In a work like “Where Dreams Were Made on Elliot Bay,” with its simple yet evocative scene of a man holding his big catch, it’s clear that Barnhart’s trip was both relaxing and artistically energizing.