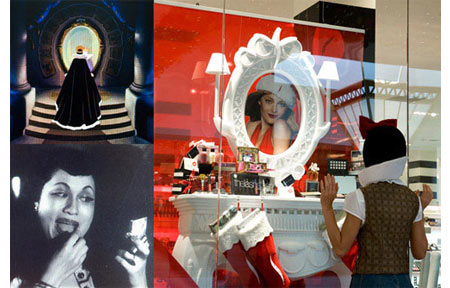 “Mirror, mirror on the wall, who’s the fairest of them all,” goes the question an aging queen asks a magic mirror who, in the blunt fashion of a critic, tells her that there is a young upstart who’s about to push her off beauty’s pedestal. So begins the familiar story of “Snow White and the Seven Dwarfs,” one that has been associated with the Disney films since its inception in the ‘50s rather than the original Brothers Grimm fairy tale, one that immortal and perversely timeless. Yasuko has mined that timelessness and transferred Snow White into herself, a Japanese immigrant navigating American culture. Through printed collages combining Disney tropes, photographs of contemporary buildings and objects and text, the artist becomes Everywoman (especially among young immigrants) among many who have formed early fantasies about life in America and the reality of daily life hereabouts. “Cleaning” shows that, fantasies be damned, housework is still mostly women’s work, even if said women are princesses gone underground. “Apple” references the notorious poisoned apple on one hand, and the symbol’s significance in technology as well as advertising that promotes progress while solidifying the status quo. Throughout, Yasuko intersperses the face of a beautiful, somewhat bewildered or bemused looking model as her stand-in, her perfect features underscoring reality and fantasy as it’s presented in different guises to women worldwide: Youth is to be envied (or emulated), there’s a prince for every damsel in distress (“Wedding”) and yes, pretty young things can make a bunch of short, sneezy, dopey and grumpy geezers do their bidding (“Wash Your Hands”). Amusing and thought provoking, this selection of ink prints on archival paper offers escape from the contradictions of daily life while letting one relish its absurdities.