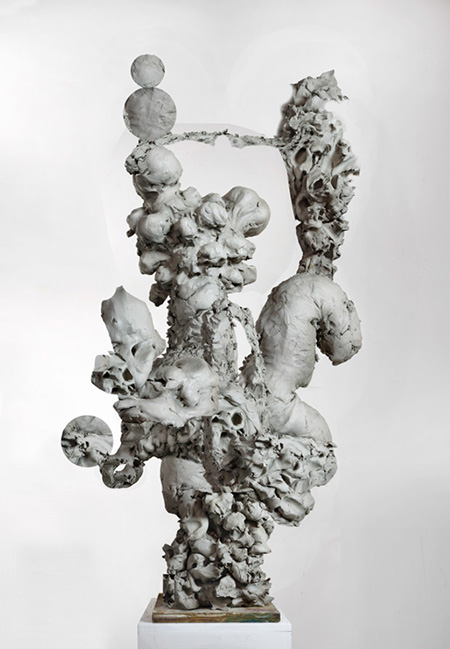 Two series of digitally manipulated photographs in addition to three projected videos comprise Oliver Michaels’ current exhibition. Its title, "Fill: Content-Aware" is an option of Photoshop software, and alludes to the way the images have been created. In "Composite Exteriors" Michaels uses Photoshop to construct an image of a building's facade created from compositing images he photographed of various architectural fragments and concrete textures. In some, a surreal structure has been created and situated in a believable environment — sidewalk, street, foliage, fencing.

While the "Composite Exteriors" emphasize a formal geometry, the "Clay Composites" are more sculptural. In these photographs Michaels worked with clay fashioned into bulbous forms and formations which were photographed in different stages — small, large, augmented, etc. and later assembled to become a whole sculpture that only exists in fragments outside of the computer and the printed image of the composited work. Once Michael's process is understood the works lose some of their appeal, as the compositing becomes too obvious. That being said, the photographs are compelling amalgamations of impossible structures that appear to be real.