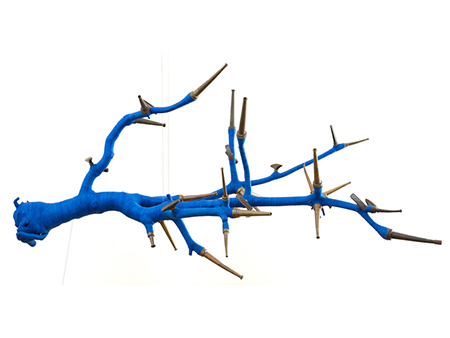 Few artists can take the found objects route as adeptly and as wittily as Blue McRight. For the last year and a half she’s been working on a series of works that delve into her interest in water and seafaring. The results in the show “Drink Me” also reference the current drought in California and our troubled relationship to water in this part of the world. Most of the work is sculptural — including free-standing pieces that marry tape-wrapped tree branches or hoses with vintage brass watering nozzles and propellers; plus two installations incorporating vintage Boy Scout water canteens.

In the former series, McRight has covered the tubular shapes of tree branches or hoses with continuously wound tape, sometimes blue and sometimes black. One might see it as the “body” of the work. For the artist, the blue evokes the Blue-ringed Octopus —although beautiful to look at and much sought after by underwater photographers, it produces a deadly venom when provoked.  The centerpiece in the main gallery is the sculpture “Siren,” which evokes that same beauty/danger paradox — “siren” being the name of the mythical female creatures who sat on rocks and sang alluring songs, drawing sailors to crash their boats on their shores.  This “Siren” is nine-feet long and suspended by wire in the middle of the room, its body twisty and undulating (a large tree branch underneath), tipped with a couple dozen threatening-looking nozzles pointing in different directions. It is also reminiscent of another mythical monster of Greek mythology, the multi-headed Hydra.

In “Siren” and a series of much smaller pieces sitting on shelves in the next room, McRight has carefully wrapped the form in tape, and threaded the surfaces to help them keep their shape. An old propeller has been added to a couple of the smaller pieces, which overall seem more humorous and less threatening, due in part to their tabletop size; but each retains a lively character unto itself. Elsewhere, a wall of elegant drawings of nautical objects on white panel — including a propeller, an anchor, a ship — nicely rounds out this excellent exhibition.