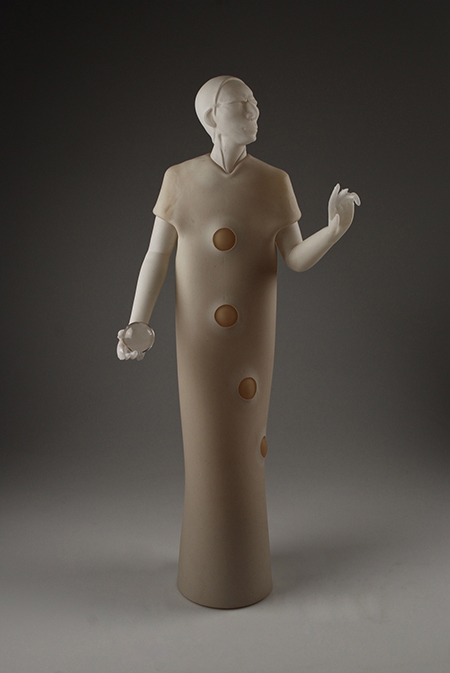 Count on artists to find not only the enchanting and nostalgic aspects of circus performance, but also the freakish, inhumane and surreal. “Ten-in-One,” the main attraction among five concurrent circus-themed exhibits at MCA, plays off the Big Top sideshow idea — ten acts under one tent — by spotlighting ten artists with divergent points of view. Some of the artists rely not so much on circus imagery but on the fantastical. All ten, though, display an admirable facility with their chosen materials, and the mediums include blown glass, porcelain, photography, found objects, beadwork and woodcuts.

Among the standouts is Martin Janecky, with three delicate and idealized renditions of Pierrot, Marcel Marceau and a juggler, all in hot sculpted glass. Jessica Joslin creates enchanting dog- and monkey-like creatures from found hardware, antique lamp parts, leather, bone, and glass eyes. Mike Stilkey is represented with an 8-foot vertical acrylic painting on discarded books, “A Dance at the Circus,” which depicts a horse blithely playing the accordion for circus-goers. More such role reversals occur in two paintings of circus animals overpowering the humans who so often subjugate them.

The inherent tensions in animal-human relationships and our propensity for putting freakish creatures on display — at the circus and elsewhere — also show up in works by Shawn Ray Harris (photography) and Tyson Grumm (acrylics on wood). But taking the prize for fantastical imagery are Sergei Isupov’s surreal porcelain sculptures, one of which — “Speech of the Wild Animal” — portrays a contorted cat giving birth to a freakishly large girl’s face.