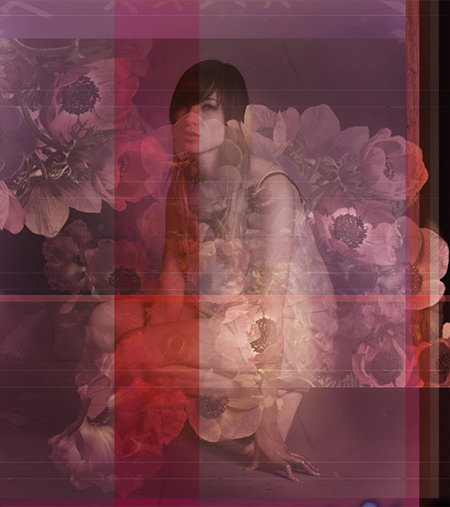 In Melanie Willhide's latest body of work, entitled "Henbane for Honey Bun," she continues a methodology begun in a previous body of work — "To Adrian Rodrigues with Love," where she used Photoshop to simulate the look of a corrupted file. Interested in the aesthetics of the failed algorithm and how its alters the image, Wilhide infects her images with irregularities. Beginning with photographs of women and flowers, she carefully combines them and then distorts aspects of the image as if dragging liquefied colors from one part to another. The effects are visually stunning as well as jarring as the subjects are dissociated from their source, becoming otherworldly. "Henbane for Honey Bun" reifies Willhide's interest in fantasy, as many of the images were appropriated from Playgirl Magazine, and they are combined with others to illustrate the hallucinatory aspects of digital photography.

"Process-based abstraction" is a M.O. that has risen to peak proliferation in painting in recent years, and even more recently is often seen in some sectors of the photography arena as well. The raindrop abstractions seen in Klea McKenna's show, titled "No Light Unbroken," are very much of this methodology. Printed on gelatin silver paper, her photograms conjure amniocentesis scans, cell studies and vague spaces of water submersion. As with some parallel painting processes, the results inevitably provoke questions around how they're made: are the pieces of photo paper simply put out in the rain for varying lengths of time? How dependent is the process on the Hawaiian-specific rainstorms as her source? What we do know is that they're made at night, and that some darkroom manipulation factors in, but that's it. The other body of photograms here, featuring very large palm fronds and what she calls "volcanic light," are both beautifully colorful and yet more pat than their black-and-white brethren. Though the fronds' illumination is dark and alluring, its potential mystery is overshadowed (pun intended) by its recognizability, both in image and to a lesser extent its process. With the palms, there's more artist and less mystery, whereas with the rain studies, it's the other way around.