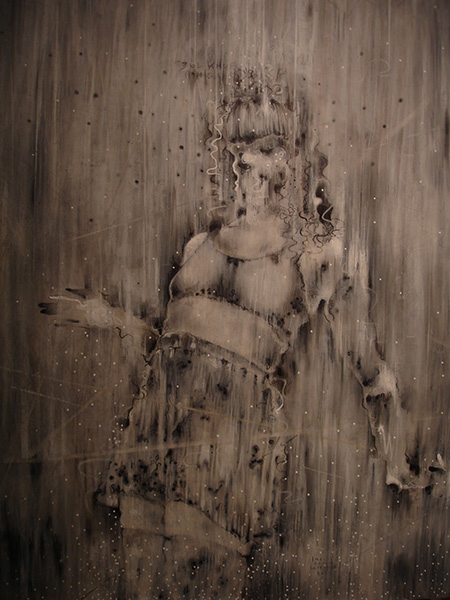 Even without the philosophical baggage, Castillo’s drawings are fascinating because of the way he builds up his surfaces to partially obscure the images while still leaving clues as to their content. “Forged in the Heart of the Sun: 10,000 LUX” depicts Asclepius, the Greek god of medicine, identified by the letters scrawled above him, which are barely legible amid multiple layers of graphite, conte crayon and charcoal. The title may refer to the god’s birth – according to legend, he was cut from his mother’s womb as she lay on a burning funeral pyre as punishment for being unfaithful to Asclepius’ father, Apollo. There is also a reference to Apollo in “Passagewaytoheracephaliccharm,” which has “37655 ILLAPA” written across it. The label refers to one of a group of asteroids known as the Apollo asteroids, which intersect the earth’s orbit. Many of the drawings include references to asteroids in our solar system that could potentially collide with Earth.

In “The Spoilsport,” two religious figures — one appears to be a Catholic cardinal, while the other may be a priest — seem to be involved in a vaguely sexual situation. Castillo describes these and his other subjects as “narcotized figures” that stagger through “almost colorless greyed-white backgrounds.” The young artist is like a sponge, soaking up everything he reads and pouring it into his work in a self-described “steam-hazed ectopic social narrative.” Castillo’s work alludes to the anxiety and alienation of an entire generation of his peers, whose extended adolescence seems partially defined by a preference for online communication over face-to-face interaction.