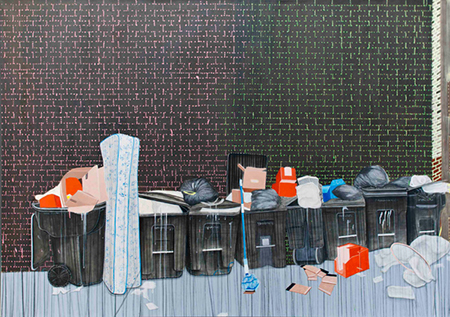 Texas-born Gabriel Villa lives and works in Chicago’s Pilsen neighborhood (the very neighborhood in which the Museum is located), and the selection of works in “Lineas Borrosas" illustrate Villa’s manner of drawing from the cultural, political and physical environments that surround him. The artist also has an extensive public art practice, and he seamlessly translates the charged, narrative symbolism of contemporary and historical Mexican mural traditions into the works he creates for the gallery setting.

In works like the triptych of paintings on paper, “MOM,” religious iconography like praying hands combine with chimera creatures peering out from beneath the hoods of the subjects' sweatshirts. “Landscape: Alley South Ashland & 18th Street” depicts a nearby alley, the gridwork of the brick wall, the line of trash bins and their overflowing contents rendered formal and stylized, yet undeniably specific. Deft at realism, Villa also includes figurative drawings in this exhibition. In “Black Hope: Poverty and Capitalism” Villa’s subject is a fellow Pilsen resident, and though the man is unnamed, through this careful, compassionate and individualized depiction he is anything but unsung.