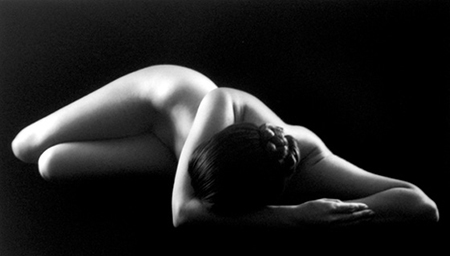 How two artists, one male the other female, depict the body, and the environment around them poses compelling questions as to whether one can really distinguish between a male or female point of view. The photographers in question are Ruth Bernhard (1905-2006) and Robert Stivers (b.1953), who are exhibited simultaneously here.

Bernhard’s classic formalist images occupy the front space and are categorized by subject; nudes, still lifes, which are more environments than table top compositions. Consider where she wants our mind to wander when she titles a reclining female nude “Perspective” rather than, say, “Odalisque." Her photographs of the female form depict the body as a sculptural object that she sensitively bathed in light in order to present it as sensual and evocative.

Stivers' images depict the body in motion. He uses his camera as a frame through which he captures his subject, often using soft focus evocative of the Pictorialist movement from a century ago. Stivers willfully allows the image to dissolve into the surface of the paper. It is clear that he, like Bernhard is enamored by the body, but his depictions eschew the sculptural and embrace the mysterious. Bernhard, were she still with us, no doubt would be horrified.