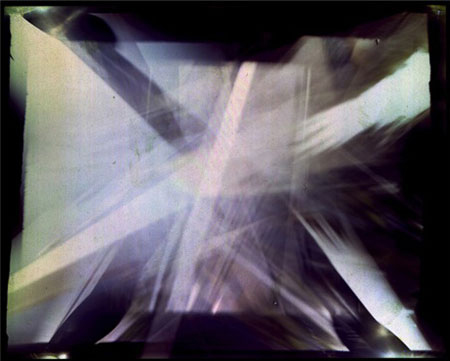 “Centrifuge” displays the works of six artists, including Roee Rosen, Anisa Ashkar, Ido Michaeli, Inbal Abergil, Aim Duelle Luski and Luciana Kaplun. It is an eye-opener for those who are interested in contemporary Israeli society and culture. Would you have expected that Latin Americans immigrated there and, in addition, face some of the same assimilation problems as in America? Or that there is a group of Russian artists called “The Buried Alive,” who refuse to integrate into Israeli culture? Not only that, one also learns through the show that a face can be used as a canvas in order to hold onto one’s cultural roots.

One of the highlights here is a wine barrel camera made by Luski, which allowed one piece of horizontally placed Ektachrome film to be exposed to 16 pinholes simultaneously. Hence, the camera photographed the large pedestrian square outside the Tel Aviv Museum of Art, capturing the municipal library, the central Court of Justice and the Kirya, the central administrative military base in Israel. It appears as an abstracted image with light shining from different directions, creating the dichotomy of a center and an edge. This can be understood as a metaphor for Israel’s fragmented society, in which some communities are pushed on the periphery or the edge. Overall, the exhibit confirms that the idea of a cultural ‘melting pot,’ as beautiful as it seems, is an illusion. And that the illusion applies to Israel much as it does for America.