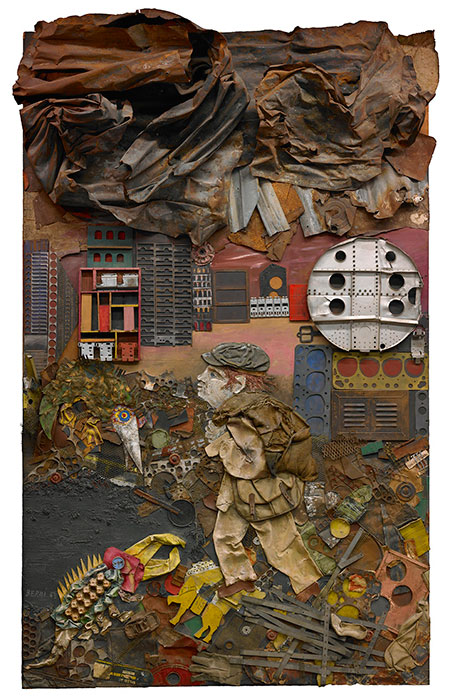 Through the 1960s and ‘70s, the Argentine painter and printmaker Antonio Berni (1905-81) focused his work on his two fictional creations, Juanito and Ramona. Juanito, the poor Everyboy of Buenos Aires shantytowns, is the subject of large, gritty assemblages in which the artistic materials are the very metal scraps, wood chips, brooms and other discards characteristic of poor neighborhoods. Ramona, the courtesan-by-necessity, is depicted in Berni’s woodblock prints and unique “xylo-collage” reliefs as a woman whose beauty is commodified through exaggerated sexuality.

Although the two characters are very different — one struggling out of poverty and one insinuating her way into high society — they both speak to myriad social and political problems as witnessed by Berni. Together, the Juanito and Ramona pieces are consummate examples of storytelling, and one can’t help but be moved by their contrasting narratives. The exhibit is an absorbing one, showcasing close to 100 pieces, including two of Berni’s 12-foot lizard-like “monsters” constructed of found objects.

A collaboration between the Museum of Fine Arts, Houston, and Malba - Fundación Costantini, this is the first Berni show organized by a U.S. museum in almost 50 years and the first to focus on Juanito and Ramona, who still enjoy folk-hero status in Argentina.