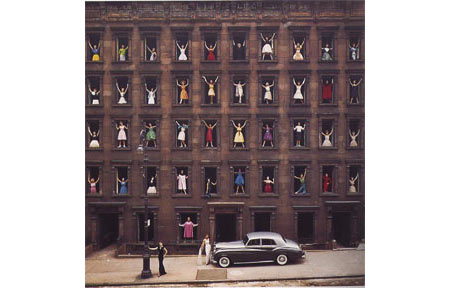 Traditional black and white photographs in standard sizes--those that typically fill partial wings of museums and photo-centric galleries--tend to blur together into an undistinguished background hum. But on occasion, if given a chance, you may find yourself quickly swept up into something transcendent. Such is the case with “The Face of Fashion,” which features exotic fashion plates from the 1930s through the ‘80s (though mostly ‘50s and ‘60s), including icons from Josephine Baker to Twiggy. The reason could be as simple as the images being so completely not of our era, or the mix of women’s freedom and control but with a touch of Victorianism mixed in. But there’s something about the exotic quality of this mid-century couture and the women who model them that holds up surprisingly well.  There’s a freshness to the posed environments that would seem coy or otherwise disingenuous in today’s photography. Here it feels natural and often endearing. Take William Klein’s “Simone & Painting + Coffee, Rome” (1960), which features a woman in a white dress and tall, dark hat ooh-ing at a classical painting that’s being transported by an unseen man as she walks down a Roman side street. Another standout from the same year is Ormond Gigli’s “Models in the Window, New York,” a color photo in which dozens of well-dressed models raise their arms as they pose, each in their own window frame forming a sexy grid above a Rolls parked on the sidewalk below. There’s a daring and performative quality here that’s reminiscent of Improv Everywhere’s “Look Up More” (2005), in which participants filled the windows of a Forever 21 store facing Union Square park in New York. Gigli and some of his peers, it turns out, captured a time that feels, however naively, missed.