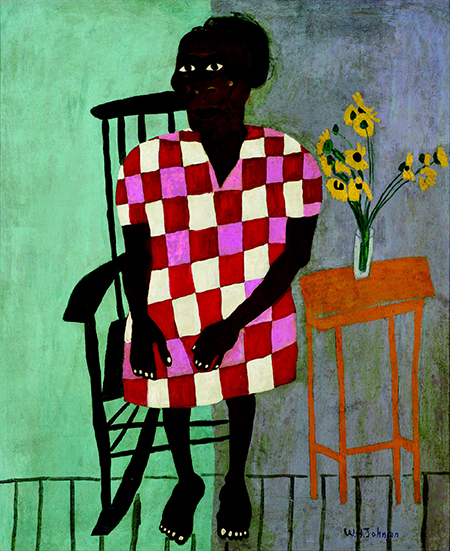 During his too-short career, painter William H. Johnson soaked up whatever environment he was in to produce vibrant, gestural depictions of those places and people he came across. In the 1920s and ‘30s he lived in France, Tunisia and Scandinavia, his output including city streets, still lifes, mosques, fjords and harbors. Meanwhile, he experimented with German Expressionism and other styles before he settled into his signature works, which are filled with hyper-attention to subject matter, geometry, simplicity of forms and intense color. They were often painted on primitive surfaces.

Ever the introspective and observant artist, Johnson switched gears upon moving to New York City in 1938 and began mining his African-American roots for subject matter. He focused, for instance, on the Harlem jazz scene. By the 1950s, illness as well as grief over his wife’s passing cut his career short.

This traveling survey from the Smithsonian — Phoenix is its last stop — is a compact one with just 20 carefully chosen works. It includes the famous “Mount Calvary I,” an oil on fabric from 1943 imbued with African-American faces and African-inspired clothing in its representation of the Crucifixion. Also on view is “Aunt Alice,” an oil on compressed cardboard from 1944, in which Johnson intimately portrays his mother. The rendering is naive and regal at the same time, and there’s no mistaking her intensity.