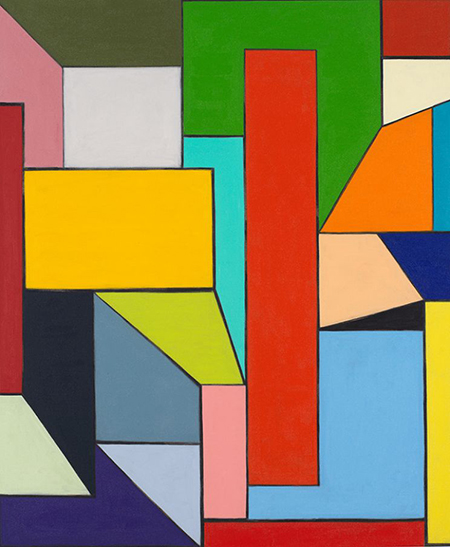 Abstraction may be over a century old, but its core conviction that colors and forms alone can be as vivid and vital as faithful representations of reality, seems inexhaustible — especially when practiced by artists of such brash intelligence and versatility as Charles Arnoldi. His current show features eleven medium-sized to large abstractions painted since 2010, along with “Talk, Talk,” one of his “Sticks" works from the mid-1980s, a thicket-like collage of jagged-ended branches mounted onto a chain-sawed plywood background, the diagonal slashes echoing and complementing the gestural wooden ‘brush marks.’

Two of the new paintings revisit this vocabulary of single, straight markings (probably made with a straightedge), built up in layers, and suggestive of random flotsam or Pick-Up Sticks. “Box Cars,” with its loosely symmetrical starburst composition; and the more atmospheric, predominantly blue and black “Edsel” are examples. Three paintings from his Windows series, “Snooze,” “Sleep” and “Wake Up,” contrast a constrictive format (of rectangles abutting each other like tiles) with lush palettes; in the two works on aluminum, the matte oil paint resembles suede — perhaps a nod to the playful visual paradoxes of Analytic Cubism. Three 2013-14 works — “Critic,” “Follow Up,” and “Vintage” — marry flat color planes, outlined in dark contours, with hints of spatial illusionism, evoking the rigorously disciplined yet imaginative abstractions of Fernand Léger and Al Held.