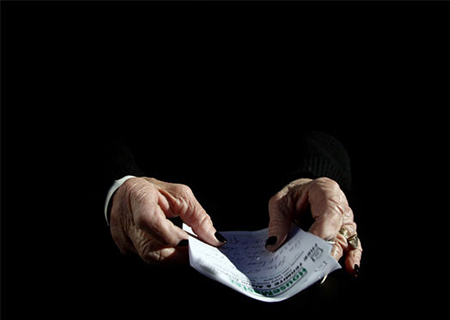 The concept of miracles is suspect to many, unless your religious belief includes this kind of phenomena as an aspect of dogma. Therefore, a viewer entering “Miracle Report” might be skeptical of the veracity of what she/he is about to see and hear. Once inside the darkened exhibition space — lit primarily by several dozen videos of hands, floating on black backgrounds, accompanied by cacophonous sounds of numerous people speaking softly, along with intermittent electronic organ sounds — the viewer is likely to feel disoriented. This is the ambiance intended by Julianne Swartz and Ken Landauer, of Bard College, who created this multi-media work during a residency at Arizona State University Art Museum. After all, miracles are often considered mysterious, if they even exist. The creative team, wanting to hear about others’ miracles, sent a missive to the local Arizona community requesting stories. They ultimately had 68 people of a variety of ages share their tales anonymously, all in videos that reveal only the subjects’ illuminated hands.

Not surprisingly, the stories are a hodgepodge, from falling in love, to escaping tragedy, to recovering from nearly fatal illnesses and more. And each one is difficult to hear, as they emanate quietly from small speakers, while competing with accounts from nearby videos. To hear all the stories requires patience, time, and the ability to stand still while listening to each one. While a few tales of heroism and of overcoming odds will remain with the viewer, it is easy to miss the forest for the trees in this fascinating exhibition. For it is an immersive experience of darkened enigmatic, even spooky sights, accompanied by a competing, whispery Tower of Babel of voices that sound otherworldly at times. Beyond the intellectual/spiritual/miraculous explanatory didactics accompanying this show, it is like a fun-house that is akin to entering an old Vincent Price movie, and evocative of Diana Thater’s “Wicked Witch” video at OCMA nearby that brings viewers into a “Wizard of Oz” scenario.