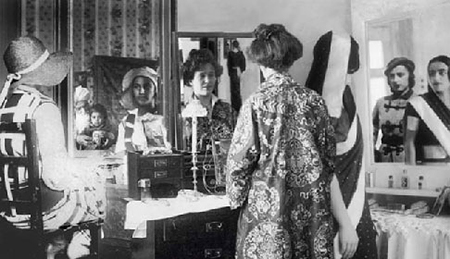 “Vivan Sundaram:  Re-take of Amrita,” operates as a kind of memory theatre wherein space and time collapse. While Sundaram’s images were created with Photoshop, they retain a glamorous retro sensibility that flares with exotica ranging from Parisian parlors to Hungarian landscapes. Mirrors, paintings, and lavish furnishings all come together to create a montage of household scenes that operate as a fictional world where generations, including the living and the deceased, collide. The result is an ethereal, composite narrative that is both compellingly complex and, quite simply, gorgeous.

The original photographs incorporated into the show’s works were done by Umrao Singh Sher-Gil — Sundaram’s grandfather — and largely include self-portraits as well as images of his opera-singer wife and their daughters, Amrita and Indira. However, a young Sundaram can also be spotted, reflected in a mirror and holding a camera. Thus, what the artist describes as his fascination, “photo-dream-love-play,” is intimated in a single image that operates as a kind of reverberating lodestar for the exhibition.

To add still another layer, Amrita, Sundaram’s relative, is the focal point around which the show, the “re-imaging,” circulates. She was lauded as India’s premiere modern artist after studying at L’École des Beaux Arts in Paris. Returning to India, she created work that conflated European and Indian sensibilities. She died suddenly in 1941 at the age of 28 and, thus, became the tragic figure that Sundaram’s “re-takes” explore. The show depicts how one reimagines the past in order to come to terms with it via narratives — in this case, reconstructed visual “stories.” The exhibition bears the stamp of a fabulously nuanced understanding of memory that is lovely, honed, and utterly irresistible.