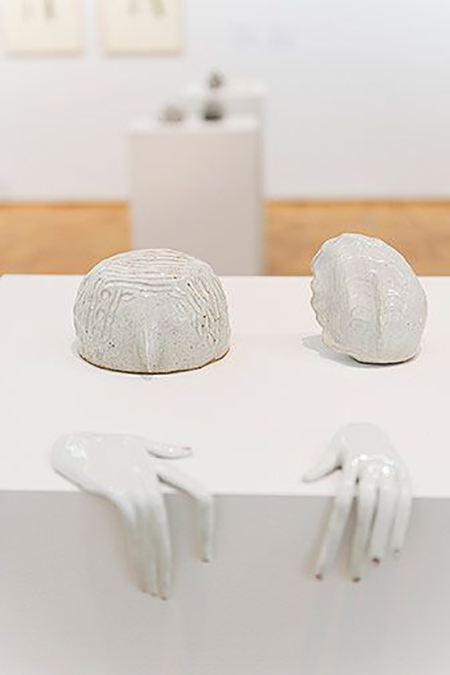 Though well-known for her comics and illustrations, Chicago-based artist Lilli Carré presents a variety of media in her first solo museum exhibition. Amongst a handful of drawn animation frames on the walls, her new venture into the genre of ceramics is displayed. These small, handmade objects are exhibited in pairs: eyeless faces matched with delicate hands and winding, organic flora with vaguely figurative rock formations. The ceramics feel alive and complete in the three-dimensional space they occupy, while the drawings are difficult to see as anything other than the nuts and bolts of her animation technique.

But, Carré is a master of animation, and it’s no surprise that “The Negotiation,” a two-channel projection, is the most powerful piece in the show. Carré’s vibrating, abstracted “characters” are pinched, pulled and mutated throughout, and the cadence of both the images’ transformations and the audio components suggest a call and response, giving the viewer the feeling that she is observing a conversation. Here, the two animations are looped but at different intervals, projected on walls opposite one another. Anything but repetitive, the staggering of the channels creates endless recombinations of audio and form to keep a viewer’s attention and imagination continually engaged.