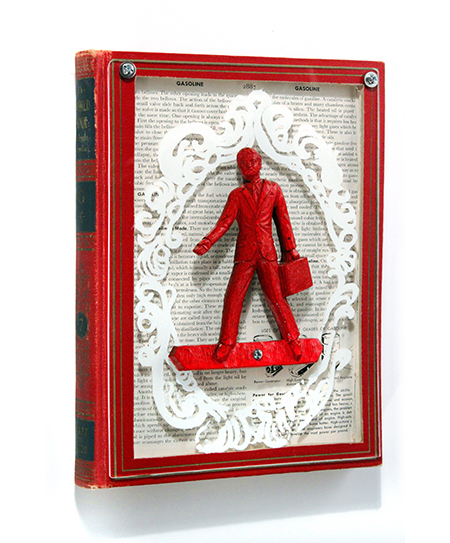 Kelly Moran’s show is large and complex in terms of imagery, materials, and construction. The artist’s background is similarly complicated. On her website, Moran describes herself as a printmaker, but she studied painting as an undergraduate and ceramics in graduate school, but discovered a love of printmaking later in her career. The pieces in this show combine inkjet prints and polymer prints with found objects, found papers, resin, and hand-carved wooden frames.

Moran’s work conjures up memories of a happy childhood in the fifties and early sixties. Paper dolls, children in clothing from the period, references to Dale Evans and other celebrities from the era, comic-book characters, pin-up girls with fifties-style hair, and ads that might have been lifted from Life magazine are just a few of the images that appear in the show.

“Dagwood’s Monkey Suit” is a large paper doll of a male figure in formal dress mounted on a background of collaged images from the 1950s to which Moran has added found objects such as airplanes and a small dog, all of which is coated with resin. To this day, there is a comic strip called “Blondie” that features Dagwood Bumstead as her sandwich-loving husband who was disowned for marrying her. “Miss Kitty” references the television show “Gunsmoke,” which began on the radio in 1952 and moved to TV in 1955. Made from wood and an inkjet print coated with shiny resin, “Miss Kitty” is a shapely female cutout with the head of a cat. Likewise, “Miss Bunny” has a bunny cartoon where her head should be.

Quite a few pieces incorporate parts of the World Book, an encyclopedia that first came out in 1917 and was a staple in middle-class homes after World War II. Several of Moran’s collaged wall pieces use a single volume of the set as the “canvas” upon which she mounts found objects set against a background that appears to be scanned images from the World Book. In “F is for Fun” Moran has replaced the pages of the volume with a patterned ground, covered it with Plexiglas, and then mounted two children's blocks on which are perched small figurines of the toddlers.

These clever assemblages and collages are both humorous and ironic. Artists will be fascinated by Moran’s techniques, while the rest of us will enjoy the imagery, regardless of whether they experienced the post-war decades firsthand or through nostalgic television shows and publications.