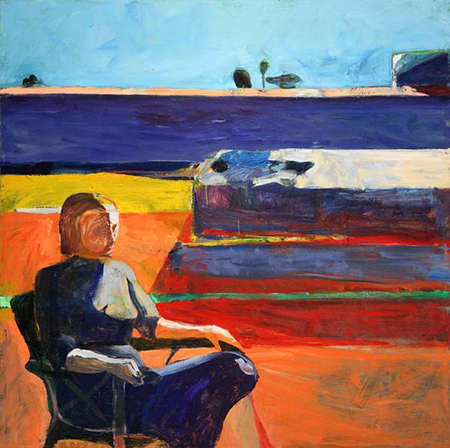 Richard Diebenkorn, "Woman on a Porch," 1958, oil on canvas. © 2013 The Richard Diebenkorn Foundation, New Orleans Museum of Art, museum purchase through the National Endowments for the Arts Matching Grant.

The over 100 drawings and paintings in “Richard Diebenkorn: The Berkeley Years, 1953-1966” divide neatly into three segments. There are the figure drawings from models, a body of work complete in and of itself, as they were normally not studies for the paintings, but works in themselves. Next come the (mostly) small still-life paintings, in which he juxtaposed two or three objects, carefully chosen for their evocative qualities — such as the two items in “Knife in a Glass” (1963). Finally are the large abstract, landscape, interior view, and figurative oil paintings that illustrate the main thrust of the exhibit — his shift in 1955 from abstraction to figuration. What did remain consistent, despite the shift, was Diebenkorn’s expressive brushwork and paint handling together with the influence of place. The warm tan, ochers, reds and oranges of the early 1950’s, shortly after his time at the University of New Mexico in Albuquerque, gave way to Northern California’s cooler palette. Even the reds and oranges in “Woman on a Porch” (1959) are overcome by the power of the greens and blues, barely visible in the underpainting of this and other paintings. This coolness is also reflected in the distance the viewer senses in the image, reflecting a sensibility similar to that of Edward Hopper. Often the figure is looking away, or is altogether absent, merely suggested by an empty table or chair, as in “Interior with Doorway” (1962). This exhibit’s focus as a window onto thirteen years of work perceptively examines the shifts, both subtle and seemingly sudden, the continuities, and also the influences on Diebenkorn’s work during this period (Palm Springs Art Museum, Palm Springs).
Judy Christensen