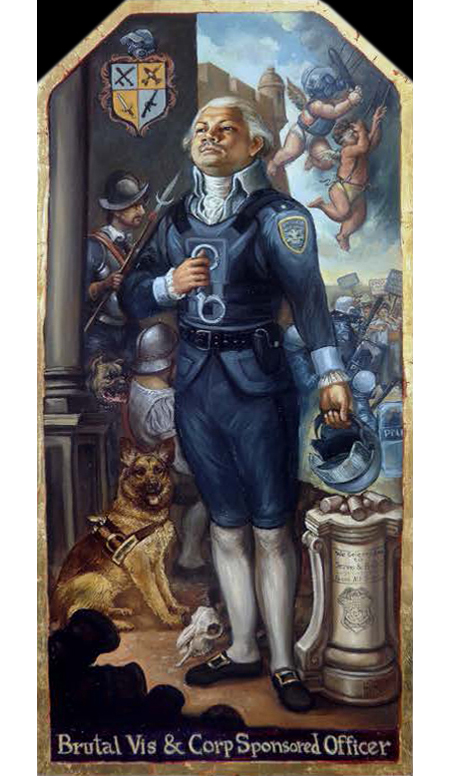 Artist Patrick McGrath Muñiz's allegorical paintings are as fantastically detailed as they are politically charged. Muñiz was born in New York but grew up in Puerto Rico — an island claimed by Columbus for the Spanish crown in 1493. The social and cultural ramifications of being subjected to hundreds of years of colonization is not lost on Muñiz, whose modern retablos — painted panels that traditionally bear likenesses of saints sacred to the Catholic canon — employ ferocious wit and biting satire. "Planet of the Apps" is a twist on Adam and Eve in the Garden of Eden. In it, the hapless subjects each look at their smart phones instead of each other — a clear commentary on the paradoxical isolation brought on by modern social media.

Latin, English, and Spanish are combined and incorporated into the works, adding to their bizarre, carnival-esque nature. Paintings like "The Uninvited" showcase Muñiz’s meticulousness and partisanship. It’s a jumbled, nutty nativity scene, whose busy cast of characters includes Ronald McDonald, a beer-guzzling Santa Claus, and Mickey Mouse; reality star Honey Boo Boo stands in for the Christ child. Sometimes Muñiz’s brushstrokes are crude, even cartoonish, which works given the content and humor that is released. For those with even a cursory knowledge of Spanish Colonial art history, Muñiz’s work occurs as a complex and refreshingly irreverent take on a panoply of reinterpreted themes.