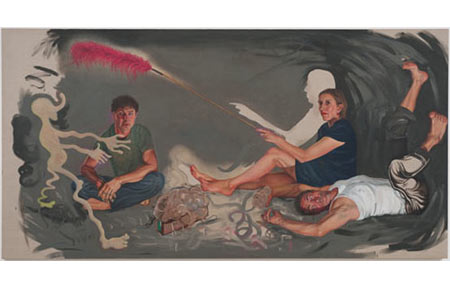 Kati Heck is a German painter living in Antwerp whose large scale figurative works depict figures that are painted in various styles ranging from exacting detail to brushy abstraction. The figures also are often deformed or partially completed, thus lending an unsettling aura to the paintings. In some, large hand-lettered German words disrupt the picture plane. Heck's works are a cross between Martin Kippenberger and Sigmar Polk, both of whom also combined different styles in single works. The paintings are compelling not only because of their physical presence and Heck's skill at combining styles, but for their confrontational subject matter.