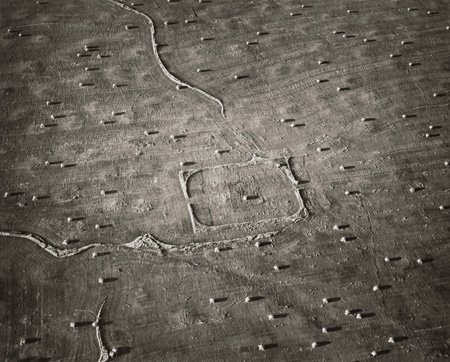 Aerial photography has the power to astound, with its access to remote places and bird’s-eye angles. Historically, its uses have included documentation, photojournalism, military reconnaissance and scientific exploration. This survey exhibition, “From Above,” includes early examples from the 1920s, along with groundbreaking World War II photography by W. Eugene Smith and revelatory views of Mount McKinley in Alaska by Bradford Washburn.

But plenty of attention is given to the aerial photographer as artist — one who can turn landscapes into abstract compositions and who can invite contemplation of planes, lines, patterns, textures, light and shadows. A fine example is Marilyn Bridges’ “Geometrics, Lone Wolf, Oklahoma,” in which a high-contrast black-and-white image of a field turns into a playful design of triangles. Similarly, William Garnett’s “Reflection of the Sun, Moss Landing #2, California,” with its branching peninsulas, could be mistaken for a flattened view of a tree and the ground around it. Adriel Heisey’s “Snow on Weathered Redrock” zeroes in on the swirling interplay and contrasting colors of snow on a rocky surface. And there’s a touch of the sacred in Martin Stupich’s “Haying near Pass Creek, Carbon County, WY,” where bales and berms resemble an ancient pictogram. Like other art photographers in the show, Stupich is well versed in aerial photography’s distinct picture-making language.