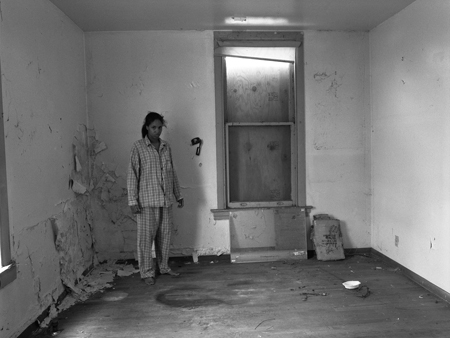 To some degree, any artist presenting work to an audience is making herself vulnerable, but for the three artists of “Backstory” vulnerability is paramount. In this exhibition of autobiography via photography, LaToya Ruby Frazier, Ron Jude and Guillaume Simoneau bravely exhibit highly personal but specific and self-aware narratives.

Through the detached lens of memory, Jude’s three expansive series of his hometown in Idaho employ the photographs taken by his teenage self, caption-less images cut from the local paper, and spectacular natural landscapes. Frazier’s “Notion of Family” project documents the very real drama of three generations of women in a declining steel town: her grandmother, her mother and herself. Taking personal exposure to an extreme is Simoneau’s “Love and War,” a composite of photos, emails and texts from a love affair with a paramour-turned-Iraq war veteran. Full autobiographies these are not, but the vignettes here each isolate a notion that defines a life: respectively, a place, a family, and a feeling.