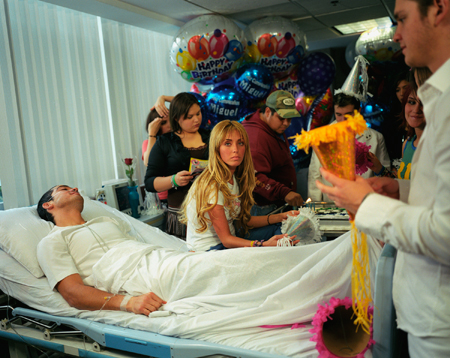 As a child, Yvonne Venegas watched with fascination as blushing brides, groomed to look their best, posed in her father’s Tijuana photography studio, trusting that he could produce perfect images they would treasure for the rest of their lives. Later, sometimes even with camera in hand, Venegas herself was pursued by fans that mistakenly took her for her celebrity twin, Juliet, a super star pop singer. Experiences such as this piqued Venegas’ interest in how photography interacts with fantasies, perceptions of reality and dreams of becoming members of the celebrity class. These form the essential elements of this series of 16 carefully selected color digital prints.

Venegas worked alongside the set of the popular telenovela series "Rebelde," featuring a fictional band made up of students from an elite academy and the group's adoring fans. The aspirations of ordinary people to associate with the famous are reflected in photographs such as “Fans con Camaras (Fans with cameras).” In an iconic example of the perfect moment, “Alberca (Pool),” the photographer captures a blond woman lounging at the edge of an infinity pool, playing to the aspirations of the mostly middle class Mexican fans of the T.V. show. Across the gallery, Venegas pulls her camera back far enough in “Set” to reveal the staging that brings dreams to life.