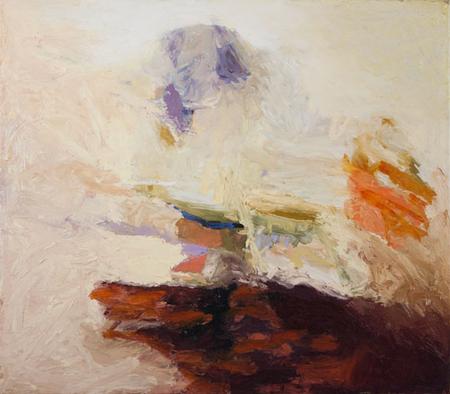 In "Confluence," oil painter Barbara Sternberger debuts a new and novel technique. To create longer-lasting brushstrokes without her brush running out of paint, she has packed dry pigment, oils, and wax into snow-cone cups, which she purchases from a restaurant supply store. She squeezes this admixture directly onto the canvas, resulting in a less mediated, more immediate application than what brushes would afford.

The results of this unconventional approach are nuanced and satisfying. In "Segue Blue," she counterposes kernel-like shapes with fluid outlines, suggesting abstracted botanical imagery, while in "Invitation" she contrasts lyrical passages with short, staccato gestures that verge on the violent. The work is very much in the tradition of Abstract Expressionism, evoking a midpoint between the push/pull color blocking of Hans Hoffman and the more diffused Proustian reveries of Joan Mitchell. Across this suite of paintings Sternberger effectively balances dense, nucleated clusters of suggested form against yawning expanses of negative space.