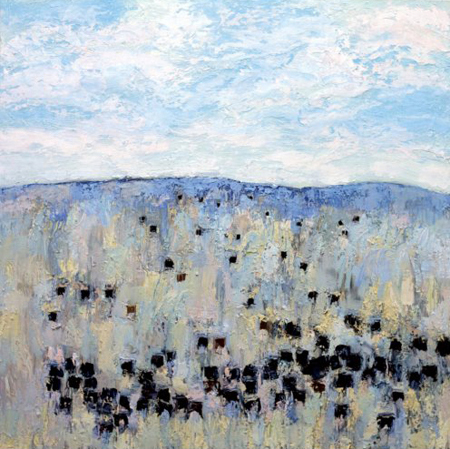 Ted Waddell is a consummately American artist, a painter who uses lush texture and soft, harmonious color arrangements to invigorate the landscape genre. He hails from Montana, that rugged, way-out-West state, and his creative sensibility is inextricably informed by the brilliant light and wide open spaces that characterize this part of the country. At twenty, Waddell left Montana, heading to Brooklyn to make art full time. There he discovered Minimalism, and originally aspired to make clean, angular metal sculpture. Today Waddell manifests this early predilection by infusing his canvases with pure light and soft color.

Waddell eventually moved back to Montana, where he painted and worked as a ranch hand. One of his most striking talents is his keenly moderated use of compositional structure. His works incorporate a cunning interplay of negative and positive space, where the animals he’s so fond of painting these days recede into indecipherable little black blurs, alongside violet and green wisps, suggestive of plants and earth. In "Wyoming Angus No.5" the titular cows are made with thick dabs of black paint, brilliantly contrasting the subdued background colors. In "Snowline Angus No. 3" a winding queue of cattle approaches a small, crisply rendered lake. The inclusion of these sturdy animals allow Waddell to transcend typical renderings of landscapes; they aren’t just pictorial elements, but also give the viewer a sense of scale and balance, anchoring Waddell’s practice in a place that’s indelibly, authentically Western.