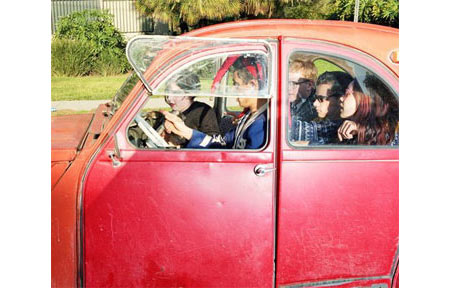 “Vector Portraits” are color photographs that Andrew Bush began making when he first moved to Los Angeles in 1989. The series continued well into the 1990s. These are quintessential L.A. images as they capture people in their car caught in traffic or driving on the freeway. The tightly cropped images taken by Bush while in his car, depict other drivers and their cars in as though they are in suspended animation. Rather than depict the bustle of the freeways, Bush singles out individuals who are perfect matches with the cars they drive. The images are nostalgic for a time when big cars and big hair dominated the roads. Blue sky and green grass enter the frame at the edges, but the images stay focused on a straightforward fascination with the uncanny relationships people have to their vehicles.