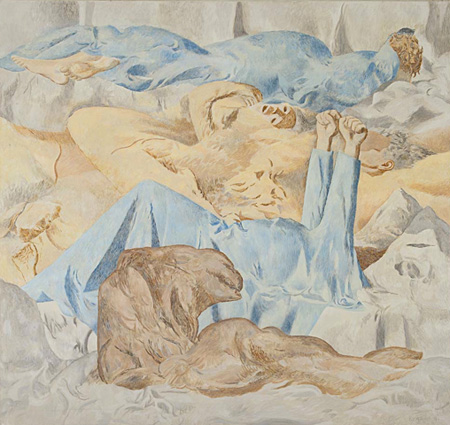 Back in September of last year, one of Greg Kucera’s artists living in Sidney Center, New York, stumbled across a neighbor’s home filled to bursting with a lifetime’s worth of oil paintings. The occupant of the house was David Byrd, an 87-year-old man who had been painting privately all his life, but never shown a single piece. Kucera decided to right that. Many of Byrd’s paintings in "Introduction" border on the prosaic: landscapes, cityscapes, laundromats, carnivals and domestic spaces, typically rendered in a way that echoes the styles of other artists. Some are dappled like Seurat, others shaded like de Chirico.

But Byrd also worked as an orderly in a psychiatric ward at the Veterans Administration Medical Hospital in Montrose, New York for three decades. He painted everything he witnessed there, and those works are the stars of the show. Empathetic and startling, they capture the neverlands of patients who occupy institutional spaces like ghosts. A portrait of a lobotomized woman in a green gown is wistful. A man with his fingers jammed in his ears, a silent scream in his mouth, resonates with more than a superficial tenderness. Other paintings depict figures frozen in tarantella-like spasms, like "Dormitory Orgy," where a wasteland of bodies undulates and contorts stiffly in what could be orgiastic pleasure or distress. Byrd’s delicate colors add to the odd sweetness of his documentation: recurring pale blues, yellow and gold are, on one hand, the cheerful color of sun and sky; but they are also the tones of sallow skin and soiled hospital gowns.