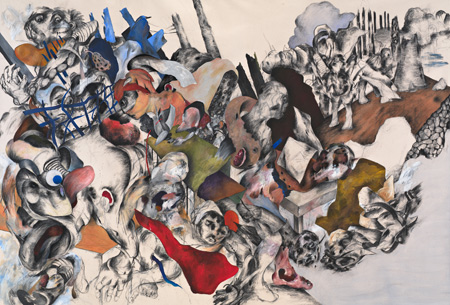 After studying at the Yale School of Art and representing Iraq at the 2011 Venice Biennale, Ahmed Alsoudani became a young artist on the rise, gathering praise for his enigmatic, vividly colored semi-abstract paintings depicting contorted figures in the throes of chaos. Indeed, in each composition, he admirably combines charcoal figurative drawings with thickly layered acrylic paint. The artist cites influences ranging from Goya and Picasso to Grosz and Bacon. The twenty works that comprise "Redacted," the artists first major museum exhibition, were al produced over the last three years.

The title makes sense considering Alsoudani’s personal history: He fled Baghdad for Syria in 1995 during the oppressive reign of Saddam Hussein, then immigrated to the United States. His paintings beg to be censored, with their overriding condemnation of war’s toll on the innocent. Stretching toward every corner of Alsoudani’s canvases are grotesque faces with bulging eyes, hybrid creatures, amorphous shapes and bloody body parts, often intertwined with each other. The artist presents this montage of misery on a large scale, with a few canvases measuring as tall as 9 feet. And the paintings ratchet up the intensity with the use of turquoise, magenta, gold, green and other vibrant colors. Wedged into the composition are disparate objects such as a clown’s ruffle, sets of gears, a cactus, a kidney-shaped basin and more details that compel a nervous laugh or provide comic relief.

Now a New York resident, through his art Alsoudani transcends that constant association with the troubles in his native land. No doubt, though, that the universal horrors of war and oppression demand expression in art; and they unquestionably receive it in Alsoudani’s strident images.